What You Will Find Here...

There are times in life, things in life we would all like to avoid. Death, illness, loss. Today I was thinking about my Mom, it would have been her 72nd birthday on Friday. She has been gone for almost 9 years this year and it is less hard than it was, on most days. There are moments I wish I could talk to her, just for five minutes. She could help me unpack things no one else could.

I was thinking of my Mom because I recently read a post by Carin Towne, the mother of the late Ben Towne. Ben Towne died of cancer at the age of 3 and Carin was brave enough to share about losing him and I was reminded of losing my mother. While in no way does it compare with the loss of child, it is the closest I have come to that pain. All I could think of when she wrote about the howling, scorching pain, was how sometimes there is no over, under or around, only through, the terrible through.

For the days you wake up and for a moment, have forgotten the pain, only to have it come screaming back. How only after losing my mother-in-law in December, my favorite grandfather in January and my husband’s uncle in February did it all seem like too much. So after I had to cancel something I had committed to, telling them what was going on, and got “And?” as a response I knew I needed to start saying “No.”

So I did, I started saying “No” to playdates, “No” to volunteering, “No” to time with friends, “No” to NPR because even the radio just made me mad. I kept going until all I was taking care of was me, my two boys and my marriage. Only then did I even start to heal.

And the magical gift which appeared were the people who were still there, patient and loving, waiting for me to return. What I gained from saying “No” for so long, was the power of “Yes.”

The power of “Yes” is making sure every time I say “Yes” to something I support it 100%. No regrets, no complaints, just “Yes.”

This is a lesson I would never have learned without visiting that dark place, where “No” was the only word that helped.

I do not wish a horrible loss on anyone, but that kind of pain changes you and helps clarify what is truly important, it helps you find your “Yes.” And so, for that, I miss my Mom, Nikki, Grandpa and David, but if it weren’t for them, I would have failed to know the true power of “flexing my “No” muscle.”

Without “No” there can be no room for “Yes.”

Of all the people I expected to mourn in my lifetime, I never expected it to be our dentist.

Dr. Jeffrey Files was our dentist for almost 10 years. His office was where our family visited two or more times a year from when my youngest was 4 1/2 until when he was 15. For our younger son, it was the only dentist he knew. His office was always a happy, safe place to go, no matter why we were visiting.

The dentist I grew up with, I thought he was a vampire and so I was determined to find someone my boys would not fear, the universe delivered Dr. Files. Little did I know he would become like one of those amazing teachers- never to be rivaled again.

We are grieving, for a friend, for someone who cared for our family, intimately and with so much love for over 10 years. His care saw us through many seasons of our life, little did we know we would be part of the last season of his, but not completely.

Once Dr. Files stopped treating patients he deteriorated quickly and we did not see him during his last year. Lou Gehrig’s disease is one which normally takes its time, not with Dr. Files. It seemed such a cruel diagnosis for someone who had given so much for so long.

We still cannot believe he is gone and I regularly cry with my youngest because we did not get to say goodbye and we simply miss seeing him. He loved his patients like family. How could someone who poured SO much love into his patients and his life be taken? He deserved to stay! The thought of the his kids he loved so much, say nothing of his wonderful wife, continuing without him. I can only imagine the chasm they are left with if we still grieve like this.

What do a Super Bowl ring, brain cancer, and a dead puppy have in common? They ALL landed in my week this week. It has been epic. Epic as in amazing and horrible all at the same time. I feel like I have been on the most intense dollar-coaster ride and am ready to get off, and throw up.

What do you take from a week like this? I am thankful when I open my eyes that I am still here, still able to love and care for my family, friends and others. Still here to serve. God isn’t done with me yet.

All I ask now, is to keep giving and serving, as my heart is broken and only time will heal it.

Our house is full of many memories, of our mothers, now gone, of joy of a new baby, excitement in finding a place to call ours with a climbing tree!

These memories on some days, feel like Ghosts- here are a few I notice often…

My mom- though she doesn’t haunt our house in the way people think of ghosts her presence is in so many things. Her influence on me to keep our house neat and tidy so we can live here without effort, her emphasis on tradition and doing things together, dining together. All of these things- and my great-grandmother’s dishes- which my mom always used to say it would upset my great-grandmother more to see them unused than chipped or broken in regular use! 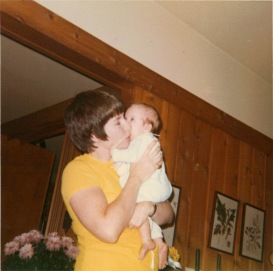 My mother-in-law, her laugh and joy of reading permeate everything in our house. She loved sharing stories and being with our boys. Some of our favorite furniture pieces are from her home- a blue loveseat which makes me smile every time I look at it and a small side table which she laughed when I told her I used it in a garage sale to put our lemonade stand on- and had more people offer to buy it than anything in the garage sale!

The layers of our past residing here- from our youngest’s first steps to our eldest’s mural- each is a layer of how we have left our mark on this home. I strive to ensure our memories here have a resting place, a photo album or story written down so we can relive them again and again and add to them as we go. As well as a way to look back on them again when we do move.

While our house may be full of “ghosts” I feel blessed with all we have been able to create here, the parties, the gatherings, the guests, every one a fantastic blessing of being-a placeholder in our memories of the joy we have shared here together so far- may we have many more!

Yesterday I learned a good friend had a miscarriage, she was 6 months along.

She had intended to surprise me with the news at a Thanksgiving party last week, but it turned out to be on the day she went to the doctor to learn there was no longer a heartbeat.

When we spoke I told her I had gone through the same thing, though at 3 1/2 months along.

What hit me was the feeling she of shame she shared, that she had not told me she was pregnant, but she very much needed my support in her grief. The word “selfish” was what came up. How is it selfish to need help when you are grieving?

How is it this loss is something we expect people to not talk about, not mention, not share! This pain, so unique and so acute, and so unmentionable. It is as if you made some ugly mistake and shouldn’t talk about it.

When you have a miscarriage people say stupid, horrible things like “It’s better this way,” “You can always have another one,” and “It was meant to be.” I say bullshit! These are words only people who have never faced this could say! How can you tell a woman whose heart is broken, who chose to share this loss with you at all- that it was meant to be!

Because I have lived this too I was able to ask my friend if she got to hold the baby when it was delivered? If they took pictures (YES I said it took pictures of her baby, who was dead), and if they had a service.

If you have felt this loss, you will understand the acute pain that comes with never holding the baby that lived inside you, never seeing it, having no photos. My one regret is I didn’t get a copy of the ultrasound image of my baby before it was gone.

We went through four miscarriages and have two beautiful sons. When we were finally blessed with our second son (order went like this, one miscarriage, one live birth, three miscarriages, one live birth) I looked at my husband and my best girlfriend and said “I have a baby!” The people in the delivery room, I am sure, thought I was a bit dim, but by then, had been pregnant four times, and only once, had been able to keep and hold my baby.

So for all of you out there who have had a miscarriage, no matter how far along you were, share it. There will be a day and a person in your world who is SO thankful you get it- and maybe we can end the shame and stigma that come with this ugly secret we keep.